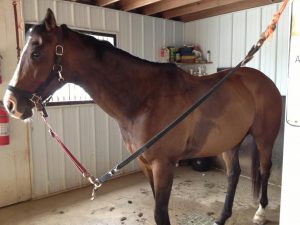 Bubba’s story is similar to that of JB.  An off the track thoroughbred repurposed for eventing but lacking in the dressage education of his body.

Like his friend JB, the “before” Bubba was also short strided, very stiff longitudinally and laterally, with a dropped back and a ewe neck. To his rider’s frustration, he traveled habitually inverted. The movement of his neck at the walk lacked the correct “telescoping” gesture, but rather worked more like a hinge mid neck with the head bobbing up and down at the walk. Bubba had minimal topline muscling and his muscles were chronically spasmed over most of his body. He had large knots all over his back, behind the withers and over the shoulders. He had endured repeated rounds of back muscle injections to no avail and was on feed through muscle relaxants when he came to Serenity. The muscle relaxants were having no effect on the muscle spasms. The vets didn’t know what else to do. With the owner’s permission, we discontinued the muscle relaxants so we would better know what was going on with him and whether or not we were making progress through our training in rehabilitating his back.

Bubba’s re-education under saddle started after about 6 weeks of groundwork. For weeks the saddle work consisted of stretchy walking until that was easy. Then stretchy trotting. When Bubba could handle carrying a rider at the stretchy walk and trot, we checked out his canter and found it to be still quite tight, bracy and crooked. I chose to delay working on the canter until more progress had been made rather than getting into a muscling contest to try to improve his canter from the saddle. I added trot canter transitions to his pre-riding longe work so that he could figure out how to balance himself getting into and out of the canter without the help of a rider.

Having achieved some relaxation and suppleness at the walk and trot under saddle, we started re-educating the aids so that Bubba would respond to rider body cues rather than relying on heavy reins for guiding, stopping, and spurs and whips for “go”. Bubba needed to carry himself and not lean on the rider. The rider needed to learn how to have contact without Bubba starting a leaning fest. As Bubba got good at softly responding to shifts in weight and position for turn, circle, stop, serpentine and the lightest one leg cue for walk and a very light two leg (calf not heel) cue for trot, I began adding in lateral work to further increase his suppleness. I had already been working leg yield on the ground during the pre-riding warm-up phase so the transition to leg yield from the saddle was relatively easy. I added in shoulder-fore fairly early at the walk. After several weeks of shoulder fore, I advanced the exercise at the walk to a full shoulder-in and then added haunches-in at the walk. When he was pretty comfortable with shoulder in and haunches in at the walk I tried the canter transition again. 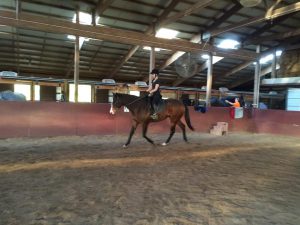 To my delight the transition was easy and the canter was light and no longer on the forehand and chargy. Bubba was actually carrying himself at a canter that was soft and a pleasure to ride. Bubba continues to learn, progressing on to trot lateral work. He and his rider are making a beautiful team!