A number of eventers have come to me for dressage lessons because the dressage component was dragging down their overall score at combined training events.  Typically, the remedy lay not just in instruction for the rider, but in retraining the horse in how to use his body. The event horses came to live with me for re-education on a full time basis.

Applying what I learned from Dr. Gerhard Heuschmann, both from attending his clinics and from translating his book Balancing Act, and from my personal trainer Jon E La Force of Indiana, the turn around of the horses has been stunning. Backs have been rebuilt, intransigent muscle spasm has gone away, ewe-necks turned into lovely arches and stride has lengthened. It’s been an amazing and gratifying experience.

The secret? Time and much patience allowing the horse to find the releases in his own body, first from the ground and then from the saddle. The horse must release his musculoskeletal system and then he must rebuild the muscle, balance, and coordination to move in a biomechanically healthy way. The time is spent to fully establish the relaxation and rhythm, the foundation of dressage training as depicted on the Training Pyramid. It can take many weeks to months to re-educate a back. But it is so worth it!

I wish I had taken good “before” pictures of JB when he first came to Serenity. He had such a severe “J” back that I was concerned I couldn’t help him. By J back I mean that there was almost a straight line down behind the withers to the back and then the back went up to the croup in almost a straight line. Actually, it was more of a “check-mark” back. 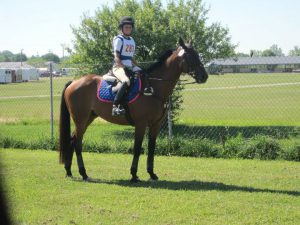 He was so frozen in the back that his stride at  walk and trot was exceptionally short on the front end as well as the hind end. At the trot, the characteristic “V” of the legs in the center was not there. Instead there was about two feet between the farthest forward the hind leg traveled and set the foot down and the farthest back the front leg swung before lifting the front hoof up. There was no toppling muscling and he was chronically tight in the neck, poll and back.  Bodywork could ease the tightness but couldn’t eliminate it longterm. Why? because JB carried himself chronically inverted.
This is not a “before” picture but is an early picture of JB’s back. It was already starting to gain mobility behind the withers. Notice the tight muscles of the shoulder from pulling himself along on the forehand and the dip in the neck in front of the shoulders