Why should a horse need bodywork? I never get a massage and I work hard! 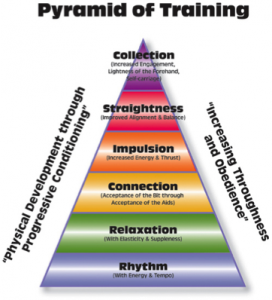 As a certified practitioner of the Masterson Method of Performance Equine Bodywork, I get that question a lot. As a dressage rider, the answer comes to mind in terms of the dressage training pyramid. Why bodywork for dressage athletes? It’s about relaxation and suppleness. The entire pyramid of training is built on rhythm (the ability to use both sides of the body equally so that the gaits are pure and the rate of repetition of the strides is regular), relaxation (mental and physical) and suppleness (lateral and longitudinal bend in the body as well as suppleness of the joints which allows range of motion of the legs).

Special efforts to keep the equine athlete’s muscular skeletal system healthy occur both from the saddle (in the form of balanced riding, warm-up and cool-down exercises, suppling exercises and frequent rest and stretch breaks during the training session) and from the ground such as with bodywork. As a bodywork practitioner, I have often been startled by the contrast when watching a horse perform and then working on the horse after they have cooled down. The horse that an hour before was exhibiting exaggerated movement and range of motion of the legs struggled to let go for the simplest releases of front and rear legs when the horse was actually in a relaxed state. Could the horse’s desire to please under saddle and possibly a little adrenalin be driving more from the musculoskeletal system than it was in condition to give? I don’t have an answer for this, just offer it as a frequent observation.

The musculoskeletal system of the horse must be in balance if the horse is to perform for us in a healthy way. Boiling a complex subject down to the simplest level, the skeleton forms the framework of the horse and the muscles act on the framework to produce movement. Muscles can only do two things: they can relax or they can contract. They can’t actually “stretch”. To produce movement by straightening or flexing a joint, muscles work in pairs. To flex a joint, one muscle must contract while an opposing muscle must relax to allow the flexion. To straighten the joint the previously relaxed muscle must now contract and the previously contracted muscle must relax to allow the joint to straighten. For the system to work, it is equally important for the muscles to contract and to relax fully.

When horses are under our control they don’t get to decide when to walk, trot or canter or just to stand still as they would when meandering about the pasture. They don’t get to decide how many times they trot around the arena, or how many times they repeat a half pass, for example. They are trained to respond to the aids of the rider. Over time, the muscles of a horse with no other issues will store increasing amounts of tension. Gradually, the ability to fully relax and fully contract a muscle is diminished. Barring other medical issues, this can result in a loss of range of motion of the skeleton. Suppleness in the body (lateral and longitudinal bend) and reach forward, medially and laterally of the legs is compromised when range of motion of the skeleton is restricted.

In general, tension develops in the muscles over time due merely to the effort it takes to do the work our performance horses do for us. Additionally, learning a new skill or movement calls for the development of new balance states, new motion coordination and the development of strength in new muscle complexes. This further challenges the musculoskeletal system and can build even more tension in the muscles. Because horses are quadrupeds, they naturally tend to load diagonally, developing more tension (usually) in the left hind and right front of their body. When this happens their musculoskeletal system becomes out of balance due merely to the work we ask of them.

To complicate matters, many things can lead to one part of the body being used more than another beyond just doing their job: an unbalanced rider, working in one direction more than the other, natural crookedness, natural differences in strength in the legs, poorly fitting tack, compensation patterns that developed in response to an old injury that are still present in the body long after the injury has fully healed, compensation patterns for a discomfort that has not yet manifested in a frank lameness, sore feet, dental issues, conformational issues and so on. When the muscles are being used in an unbalanced way, excessive torque is being applied to the skeleton. A common result of musculo-skeletal imbalance is when the horse twists his head in a shoulder-in or half pass or perhaps when the horse can move in one direction better than in another. This is also often the cause of a common misalignment of the pelvis: looking at a horse from the rear and seeing that one side (usually the left) is lower than the right.

Muscles attach to bones through tendons and ligaments connect the bones of the joints. When joints are restricted by excessive muscle tension too long, damage can occur to the joint or the ligaments that stabilize the joint. If excessive tension of muscles is putting too much tension on a tendon for too long, damage can result to the tendon. Studies have shown that about sixty percent of career ending injuries to equine athletes involve soft tissue injuries.

Relaxation is a mental attribute as well as a physical one. A dressage horse is happiest in his work if he is confidently relaxed in his work. If a horse is equally supple and flexible throughout his body, he is much more likely to be physically relaxed in his work and to perform at his best. In this way, effective bodywork can be a significant help to trainers, allowing them to focus more time on skill development in the horse rather than having to re-establish every session the suppleness and relaxation necessary for the skill development. 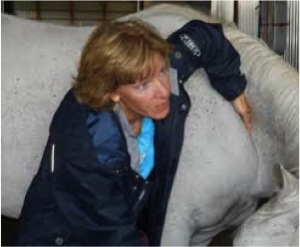 Why bodywork? The reasons are many. Effective bodywork that releases tension in the soft tissue and restores range of motion of the skeleton makes sense for our equine athletes to better enable them to learn new skills, to enable them to perform at their best and to help preserve a long and useful life. It also just makes them happy! One of the very best reasons for bodywork if you desire to learn to do at least some level of bodywork yourself is the way it enhances the relationship with your horse.

For bodywork to be effective, the practitioner must be able to “stay under the radar” of the bracing reflex or it won’t have the desired effect. This is due to the nature of the horse, the ultimate prey animal. When feeling threatened by something in the environment, he is hard-wired to run away first and ask questions later. Survival for millennia has been dependent on life in the protection of the herd. Consequently, horses try not to show discomfort in their body. They hide it until a lameness or sickness develops that they can no longer hide.

This is especially true in what we commonly refer to as “stoic” horses. It isn’t that stoic horses don’t feel the discomfort, indeed they may be more sensitive than average, they just try harder not to show the pain or weakness. To show weakness means to likely be cast out of the herd. This tendency to hide discomfort can complicate diagnosis of performance issues.

In bodywork we often find where the horse is uncomfortable or especially tight by “stumbling” on the area and observing the horse’s body language (often merely the blink of his eyes) that tells us there is something there that the horse needs help with. The effectiveness of bodywork is often determined by the practitioner’s ability to perform a technique with the horse in a relaxed state with no bracing by the horse against the technique. This takes much practice to develop the timing and lightness necessary in the bodywork, especially one that follows the principle of non-resistance as does the Masterson Method.

For more information how the work we de affects your horse’s body, read “Movements Revealed”, an article co-written by Coralie in the April issue of Dressage Today.